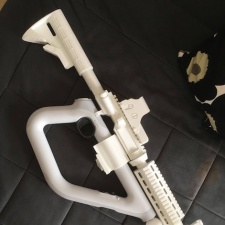 Sony’s Aim Controller might be in short supply, but that hasn’t stopped one MyMiniFactory user from coming up with a peripheral for the peripheral – and it looks great to us! Rafael Lacerda obviously felt - the same as many PS VR gamers - that the Aim controller’s ‘drainpipe’ aesthetics could do with a military makeover, so he created the M4 Mod.

The design is ready to be printed in 3D at home, at a 3D printing centre, or using an online service. You can leave the designer a $5 tip while you're there if you're feeling grateful, too.

Lacerda’s inspiration came from watching Sci FI movie about a VR FPS, The Call Up, where the virtual can have fatal consequences in reality. He said, “Feeling the weight, the palpable texture of the weapon helps to deceive the brain so that we have a deeper immersion in Virtual Reality".