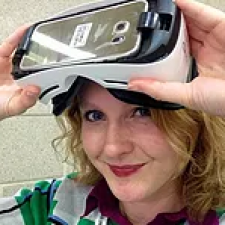 The VR Diversity Initiative may have only just launched, but they’re already planning their first UK event. Date and location are yet to be confirmed, but they tell us it will feature a roundtable discussion on overcoming the issues faced by under-represented groups in VR, as well as three one-hour masterclasses from inspiring industry professionals. A development workshop will then follow, where attendees can create a rough prototype project or script.

The VR Diversity Initiative is a new UK-based program providing support and workshops for under-represented groups in media and technology, including women, LGBT and minority ethnic professionals who are considering a career in the VR space.

The program is headed up by Focal Point regular Catherine Allen, a VR producer and curator whose credits include producing one of the first VR documentaries at the BBC and exec producing the BBC’s first 360 talk show. Allen said, “VR is fast evolving from a cool new medium into a fully-fledged industry. As this happens, this industry is truly what we make of it. We have a golden opportunity, before norms bed in to make VR healthy and inclusive from the beginning.” She continued, “This approach is not only ethically sound, but makes commercial sense too: a diverse workforce is what we need to attract mainstream audiences and sustain the industry for the long term. The need to turn words into actions has become increasingly pressing, and therefore I am delighted to lead the efforts of the VR Diversity Initiative.”