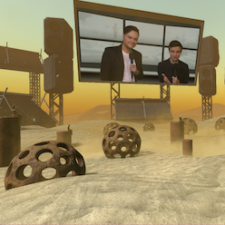 Ctrl has been selected to be part of the VR Cinema line-up in Amsterdam From 22nd Feb. For €12.50, visitors get a choice of four different packages to choose from at the cinema, with Ctrl by Breaking Fourth available as the Sci-Fi package. This 20min production will be shown every half hour from 12:00 - 22:30 each week from Wednesday to Sunday. Ctrl will run for 4 months up until mid-June.

Ctrl is Breaking Fourth’s debut drama and it premiered at RADA studios in London in July 2016. With a dark and serious tone, this production takes VR content forward into new areas. It was subsequently released for Samsung GearVR, showcased at key film and VR events such as TIFF and Oculus Connect, and was nominated for the Proto Awards + Wired Innovation Awards.

Breaking Fourth is a virtual reality studio based in Tileyard Studios in London (UK), founded in 2015 by David Kaskel and Ken Henderson. Breaking Fourth’s aim is to create compelling, thought-provoking content that pushes the boundaries of VR storytelling.

The VR cinema began as a pop-up travelling around different European cities before settling in a permanent venue in Amsterdam last year. Since March 2016, the VR cinema has welcomed over 25,000 visitors through its doors. About Breaking Fourth: