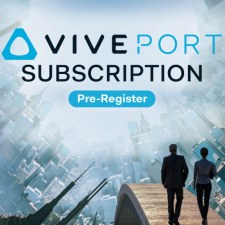 The world’s first VR content subscription model will launch with a one-month free trial, after which customers will pay £6.99 a month for unlimited access to five titles of their choice from a curated list, which they can change every month. The scheme will launch with more than 50 titles including apps such as TheBlu, Richie’s Plank Experience, Everest VR, Fantastic Contraption, Mars Odyssey and more.

The subscription model represents an additional revenue channel for developers, as well as a way to reach broader audiences.

Rikard Steiber, President of Viveport at HTC Vive said, “Introducing a subscription model to VR is a natural evolution of where this market is going and, as film, music and TV have proven, it’s becoming the preferred way customers want to explore and experience entertainment content.”

You can pre-register for the subscription service at Viveport.com now.