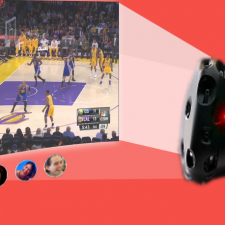 DabKick, a social media content sharing app, has partnered with Ericsson to bring phone-to-VR functionality, meaning users can share media from a smart phone with a Vive user - and vice versa - whilst interacting live. Currently, Vive is the only VR platform with DabKick compatibility, but the company has confirmed plans to support all VR platforms.

Smartphone users see the regular 2D, window-overlaying DabKick UI, while VR users are presented with a large, theatrical screen and multiple separate windows. Only 2D media content like YouTube videos are available at the moment, but DabKick will eventually support 360 media content, allowing smartphone users to enjoy 360 photos and videos with people in VR.

More For The Mainstream

Diomedes Kastanis, Vice President and Head oF innovation at Ericsson said, “DabKick’s new VR functionality is a significant development for mobile carriers and device manufacturers.” He went on to say, “A cross-platform social VR experience has amazing potential to increase VR adoption and user management across both the VR device and smartphone markets.”

Balaja Krishnan, Founder of DabKick, envisions the next generation of live communication and believes VR will have a big role to play, “We truly believe by connecting VR headsets and smartphones, we are going to bring a lot more VR adoption than what we have today.”