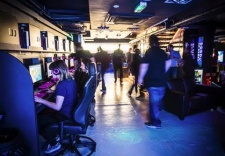 Martyn Gibbs, CEO of GAME explained the company’s goal to bring in new customers and engage in the world of esports, “Almost half the population plays video games and three million of us compete online, and a key part of our strategy is to expand into this fast-growing world of esports.” He maintains that, “BELONG is now at the heart of this strategy as we seek to combine multichannel retail, events and esports.”

Although esports is a focus, VR booths will feature in BELONG zones. This could potentially result in an influx of new VR users, as we’ve seen that 50 per cent of consumers who try a VR headset enjoy it and plan to purchase one.

HolodeckVR To Launch At ISPO MUNICH 2017