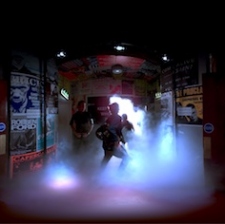 O2has today launched a series of VR experiences. For the first time, O2 customers and fans can go head-to-head against the England Rugby team or explore an O2 Academy venue as a star or a fan at a sold-out show.

In a world-first combination of real-life 360-video combined with interactive CGI characters, O2 is giving gamers and rugby fans alike the chance to compete against the best the nation offers in rugby talent.

VR players are then challenged to track the player’s movements (and those of the ball) and take part in virtual drills developed in partnership with England Rugby. The interactive, points-based drills range from scrummaging to tackling to kicking with the ultimate aim of being selected to wear the rose.

Paul Gustard, Defence Coach at England Rugby said, “It’s the only game out there that has had input from England Rugby. I hope the experience gives rugby fans and novices alike an insight into the way we train and the hard work that’s involved in being an international rugby player.”

Featuring a cast of over 100 and filmed by a crew of almost 30, the experience offers two experiences in one – allowing users to live through a pre-performance at an O2 Academy venue as either a music fan or a member of a band.

Using a unique, interactive and switchable storytelling mechanic, users can constantly swap between the music fan and band perspectives – experiencing first-hand how the excitement builds both in front of and behind the stage.

The experience is the first time an O2 Academy venue has given 360 ‘behind the scenes’ access, with the band’s point of view showcasing how musicians build up to an event, from leaving the tour bus to being backstage in the dressing room and walking onstage.

A third experience showcasing some of the biggest moments at the world’s leading music and entertainment venue, The O2 will also be coming soon. Gareth Griffiths, Head of Sponsorship at O2 said, “We believe in live and using the latest VR technology, we can showcase our live experiences to O2 customers in our stores across the country. Through a combination of world-first CGI and unique gameplay, each experience has been designed to give the user unprecedented access to O2 Academy venues, The O2 and our relationship with the England Rugby team”