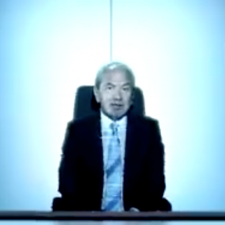 At the end of the most recent episode of series 12, viewers of the BBC’s The Apprentice were treated to a sneak peek at this week’s VR based task.

For episode nine of the 13-part series, the remaining contestants were asked to put on their headsets – a bank of HTC Vives – and found themselves in a virtual boardroom. Cue impressed sounds like, “Wow!” and “Amazing!”

Sir Alan Sugar materialised in his customary central chair, where he bid his audience, “Welcome to the future!” Before going on to explain that, “For this task, you’re going to design a new Virtual Reality game.” Predictably though, Lord Sugar goes on to say, “But as important as the game will be the brand that you create.”

Not only will the teams have to make a VR game, but they will have to present their finished product at Comic Con. Lord Sugar warned the contestants that, “To succeed, you’re going to have to push your imagination and design skills to the maximum.” Before closing with the words, “Now don’t forget that in VR, anything can happen...” As the walls of the boardroom fly away to reveal the Earth seen from space.

The Apprentice will air at 21:00 GMT this Thursday 1st December on BBC One and will be available on BBC iPlayer shortly after.

You can see the trailer for yourself here.