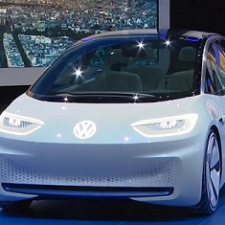 Volkswagen (VW) has announced its plans to integrate AR technology in its new electric vehicle (EV), the ID. Klaus Bischoff, Executive Director at Volkswagen Design, has told Autocar that VW engineers are using a new technology called ‘Augmented HUD’ (Heads-Up Display). The new system will be able to overlay information and project pictograms to appear as if they are 15 metres in front of the driver. Instead of glancing back and forth at a Sat Nav, navigation directions such as turn arrows appear as if they are on the surface of the road in the path of the driver’s gaze.

VW wants to take its augmented HUD tech beyond just navigation through the use of the HERE mapping cloud system, which recently received an award for best VR business demonstration. The HERE system distributes live information such as safety warning to vehicles currently being driven on the road, after collecting data from a combination of Lidar-based 3D maps and vehicle sensors connected to the system.

VW has confirmed that the ID will go into production during 2020, and is sure that augmented HUD technology will have developed much more when the car hits the showroom.

This is one more example of the impact that VR and AR is having in automotive production and marketing, following Jaguar’s social VR announcement of the I-PACE electric SUV last week.