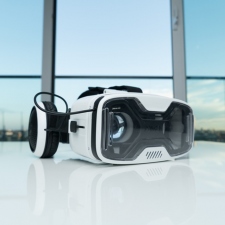 The MVR Ascend is a tether-free VR headset and controller that allows the user to play existing and future PS4, Xbox One and PC games in VR by streaming them to your smartphone. Due to the headset being smartphone based, it can also be used to play VR and AR apps.

Affordability is strongly emphasised on the Kickstarter, along with its wireless functionality and the fact that head movements are converted into analogue stick movement on the controller, allowing any game on Xbox One, PS4 or PC to be played in VR.

The Ascend also features an Aim Down Sight (ADS) function that allows the user to temporarily disable the external sensor for accuracy when needed, as well as interchangeable 2D and 3D lenses to help reduce motion sickness. The HMD has a flip-up function on the headset to make external interaction easier by avoiding the need to completely remove the headset.

The estimated delivery for the various pledge packages is July 2017. Currently, the kickstarter project has received £14,943 of its £150,000 goal.