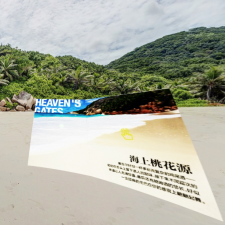 HTC has just launched Vivepaper, enabling Vive users to read magazines in VR for the first time. Working in partnership with Condé Nast, one of the biggest magazine publishers in the world, the first magazine in this format is the December issue of Condé Nast Traveller (China Edition).

Vivepaper employs a hybrid AR-VR model that HTC is calling ‘Augmented Virtual Reality’ (A-VR), because we obviously don’t have enough acronyms already. To access the content, users with a specially designed AR-enabled physical Vivepaper booklet can use the Vive’s camera to open the interactive issue, containing 360° photos and videos, 3D models, 2D content, and audio.

Confirmed publishers to follow Condé Nast onto Vivepaper include China Daily 21st Century English Newspaper, Caixin VR and The Publishing House of Electronics Industry. HTC is also in discussions with several major western publishers to release Vivepaper versions of their content outside of China.

"Vive has been leading the VR market in innovation and we are the first to demonstrate the merging of VR and AR technology onto a single hardware platform," says Alvin W. Graylin, China Regional President at Vive, HTC. "With Vivepaper, we will enable the millions of books, magazines, newspapers and periodicals that have existed throughout history to come alive in the virtual world."

Vive PC users can download the Vivepaper app now, while Android mobile users can access the developer beta at Viveport M. An iOS version will be available later this year.