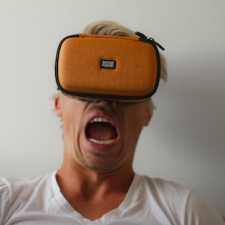 Seven ambitious entrepreneurs grabbed the chance to pitch their products and services to a panel of industry experts at this year’s Slush PLAY in Reykjavik, Iceland as they competed to win a pile of VR development hardware.

Before the panel announced the winner, they felt compelled to give an honourable mention to the young team behind MovieMask, a headset aimed at movie lovers. The Trondheim team consists of two founders, Harald Manheim and Eirik Wahlstrøm, and four students from the Norwegian University of Science and Technology (NTNU) who aim to offer the most immersive cinema experience outside of the theatre.

Where VR headsets typically focus on split-screen 3D for gaming and interactive entertainment, MovieMask has been designed specifically for viewing movies, using a single full screen from your smartphone, effectively doubling the display resolution compared to other headsets. Cutting functionality may sound like a technological step backward, but this simplicity is MovieMask’s Ace card if you just want to watch movies as if they were on a 100” screen three metres away.

Aiming to retail for $54, MovieMask has already had positive reviews from the Norwegian press ahead of its release later this year. The project was originially funded by the founders and their kickstarter campaign reached its goal of 100,000 Norweigan Krone in just three hours. It’s now at kr276,884. If you want to back the project, the Kickstarter ends at 18:58 this Thursday, 6 October.

Find out about the Start-up Pitch winner here.