Gear VR is here, it's getting great reviews 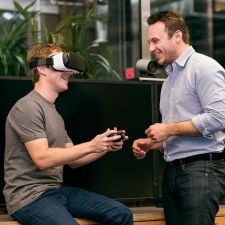 The Samsung Gear VR was launched in the US at a $99 price point and it's fair to say the initial response has been favourable.

"Our mission with Oculus is empower you to experience anything, anywhere with anyone. Now, you can begin to step into a world with thousands of immersive videos, movies and games with Samsung Galaxy S6 and Note 5 phones.

"I believe VR is the next big computing platform -- and a lot of people will experience it for the first time on mobile. It's hard to explain how fun and immersive the experience feels of instantly being in another place -- in space, under water, on a mountain, anywhere.

"I look forward to many more people having this experience in the years to come."

The post included a photo of Zuckerberg playing CCP's Gunjack Gear VR with Oculus CEO and as he was also keen to note, they aren't the only ones getting excited about Gear VR.

The reviews are in

Fortune says "Gear VR is the best money can buy", the Verge expressed a few small niggles with extended play but were generally pretty blown away by the experience and the potential,

"For people who already own a new Samsung phone, spending $99 for this caliber of virtual reality seems like a no-brainer."

Elsewhere IGN gave it a thumbs up and CNET a solid 4/5.

With reports that pre-orders were selling out in certain US outlets, it seems that the early adopting consumers are in agreement.

We'll be covering Gear VR and VR in general a lot more in the future, both on these pages and sister site Pocket Gamer.