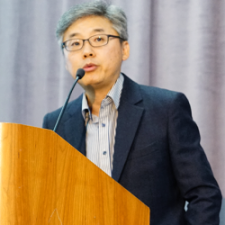 Dr. Sung-Hoon, Vice President at Samsung, has said that his company is working on not one, but two new HMDs. The first – as you may have expected - is Samsung Gear VR 2, which he said, “Will be presented in a short time.” The second – this may come as more of a surprise - is an AR headset that aims to build upon existing AR technology from Microsoft’s HoloLens and Magic Leap.

Sung-Hoon’s revelation came as part of his keynote presentation at the San Diego Virtual Reality Summit, during which we learned that Gear VR 2 will be a mobile VR headset, but also that, “Samsung is building two VR engines”.

The remainder of the Samsung VP’s keynote offered no further information regarding VR though. Instead, the focus of the presentation was on AR, with Sung-Hoon acknowledging that, “AR has much better business development for Samsung. That’s what we’re aiming for.”

Sung-Hoon explained that the Korean company believes there are four levels of AR technology, of which it is aiming for the third: user interaction with virtual experiences in the real world. He gave the example of Pokemon Go, where a user might find Pikachu in a tree - but with the level of interaction Samsung is aiming for, you can move the leaves of the tree aside to reach Pikachu.

After reiterating that Samsung is looking to work with people, start-ups, or established companies working with AR and VR technology, Sung-Hoon extended the invitation that, “If there are any good ideas to make AR glasses, we want to talk to you.” He also announced that the company is expecting to unveil its new technology at the 2017 Mobile World Congress in Barcelona, Spain on 27th February - 2nd March.