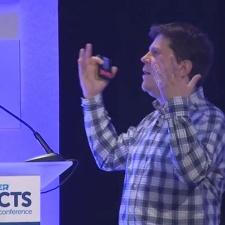 Sometimes you just feel it in your guts.

That's what Patrick O'Luanaigh, the CEO of UK developer nDreams was talking about at Pocket Gamer Connects London 2015.

More specifically, O'Luanaigh was focusing on the company's year-long fascination and experimentation with virtual reality; something he called its "VR epiphany".

"It's all about presence," he said, refering to the term that all VR advocates argue is the technology's unique selling point.

Still, the journey from epiphany to releases games hasn't been easy, especially with key technology such as Oculus Rift still a year away.

In the meantime, nDreams is focusing on Samsung's Gear VR as its default standard, while also including mass market (and less advanced) technologies such as Google Cardboard and the Zeiss VR One.

And it's the latter number that is most important, or even  "super important".

O'Luanaigh is happy to point out that not everything you've heard about VR is correct.

VR doesn't need to be first person, he says, also noting that nDreams has made games which don't have character movement or indeed requiring the use of controller input.

Interesting, however, he says "audio is really important", something that may be an issue for mobile game developers, who tend not to treat the ear as a vital sensor input.

You can see all our Pocket Gamer Connects London 2015 footage here.

We are now gearing up for Pocket Gamer Connects San Francisco 2015, which will be held on 7-8 July.

You can see more details and register for the show here.