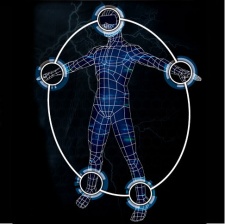 Wearable tech and virtual reality were expected to make a significant at CES 2015, and while there weren't many new reveals in either area, both still managed to easily grab the attention of the expo crowd.

Among the VR exhibitors was technology company Sixense, which demonstrated its wireless controller STEM System to an apparently impressed audience.

Best of CES VR goes to controls, not headsets

Controls for virtual reality systems have been mostly washed over by the major players, and many fans of the forthcoming VR gaming revolution are beginning to wonder how this potentially major obstacle will be handled.

It's here that Sixense has been pouring its focus, rather than on creating yet another HMD. The STEM System consists of two handheld units with thumb controls on the top of each, and both motion and positional tracking capabilities.

The base unit is able to detect the precise position of the two handheld units within an 8-foot radius, and some headway has been made in terms of mounting the actual detector on the user. The benefit of this system over similar, camera-tracked controls is that the hands never go out of view, to be lost within the game.

It also tracks nodes that can be positioned anywhere, and on anything you want to incorporate into the virtual reality experience. Primarily this is being used for head movements, but there's no reason nodes couldn't also be placed on other boy parts, or even objects that aren't attached to the player. Think of how they could effect companion cudes in a VR version of Portal, for instance.

The company's lightsaber demo earned the STEM System two Best of CES awards in the virtual reality category, and a lot of coverage besides. And being compatible with the Samsung Gear VR makes it immediately usable, although only devkits are currently available.

"The very positive responses to our demos on Samsung Gear VR reinforced our belief that mobile will be the platform that represents the future of virtual reality," concludes Sixense CEO Amir Rubin.