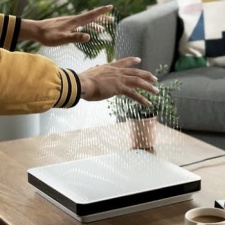 According to a recent study by the National Research Group, while most consumers are eagerly anticipating the metaverse, 78 percent agree with the statement, “When interacting with people virtually, I miss the ability to physically touch and interact with them.” Emerge plans to remedy this with the Emerge Home system.

“Emerge represents what we hope could be a next paradigm shift in human interaction,” Sly Lee, Co-CEO and co-founder of Emerge, was quoted in a press release, “Emerge Home’s goal is to take people beyond the screen and allow them to connect emotionally in a natural way, no matter the distance between them.”

Emerge’s goal is to allow users to feel the virtual world without gloves or other wearables. The Emerge Wave-1 creates a mid-air field that users can interact with. Additionally, the field can span up to three feet above the devices and 120 degrees around it. The device will be available via Kickstarter in February 2022, with a retail value of $499.

“Emerge Home is the first step in a broader journey to create a new language of touch in the virtual world,” said Isaac Castro, co-CEO and co-founder of Emerge, “We are starting with virtual reality today and exploring other interfaces in the near future.”