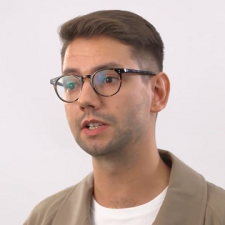 Hoffman was most recently project lead for Fiddlesticks’ Hue, which was published by Curve Digital for Xbox One, PS4, Vita and Steam, winning more than 25 industry awards in the process. He was awarded a BAFTA Breakthrough Brit for his work in the UK game industry.

Hoffman joins Lead Developer Paul Mottram and Executive Producer Ben Hebb of Near Light (both previously of Zoë Mode) on the Reality Clash project, which blends elements of multiplayer, AR and cryptocurrency on iPhone and Android devices.

“I’m delighted to be joining a great team to work on one of the most ambitious mobile games projects to date – I can’t wait to get started,” said Hoffman. “As soon as I heard that Reality Clash combined AR, crypto and multiplayer I knew it was a game I wanted to be part of. It’s going to bring the world of crypto and gaming together in a way that’s never been attempted before.”

Tony Pearce, Reality Gaming Group co-founder said, “We were absolutely thrilled with the level of participation in the Reality Clash ICO, and now we’re even more excited to embark on the next stage of that journey – the expansion of our development team as we work towards delivering what is a hugely exciting project. We’re privileged to have a talent like Henry as part of the Reality Gaming Group team.”

Reality Gaming Group has also ramped its development hub in the Philippines, which is charged with building out the Reality Clash in-game weapons line-up and its blockchain-based ‘Armory’ weapon trading platform, which is due to come online this winter ahead of the game’s release.

The company recently raised $3.5 million via an Initial Coin Offering (ICO) using Ethereum blockchain technologies to fund the development of the highly-anticipated title, which is due for release in Q3 2017.