Apple Hires From Space For AR 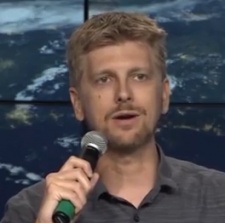 It’s quite possibly the worst kept secret in VR/AR that Apple is working on an AR headset. Now, two recent senior appointments make it even more apparent that the Cupertino company has its sights set on the AR sector.

It was revealed this week that Apple has employed Jeff Norris (main picture), a former new technology specialist with NASA. His work included 2015’s Project Sidekick that sent two HoloLenses to the International Space Station, enabling astronauts to access, “Remote expertise and a holographic instruction manual onboard the ISS”.

Norris reports to Mike Rockwell, whose team is working on AR glasses for iPhone, according to reports on Bloomberg’s website.

Apple has also hired 3D and 360 VR plugin developer Tim Dashwood, the creator of the 360VR Toolbox plugin. The news was broken by Final Cut Pro site FCP.co, who also shared the news that Dashwood has now made his existing plugins available free of charge.