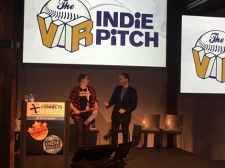 Today, we're speaking to Dodreams' Emma Kiiski, who won the XR Indie Pitch at XR Connects Helsinki this year with their game, Drive Ahead! Minigolf.

Emma Kiiski: I’m Emma Kiiski and I work as a game artist at Dodreams in the mini golf team. We at Dodreams like to bring your family and friends together playing games either on the same device or online. We are the creators of the Drive Ahead! family of games. Drive Ahead! is a gladiator car game where you score points by hitting your friend in the head with a car.

We wanted the next Dodreams title to be a member of the Drive Ahead! family. We started imagining what the car gladiators in Drive Ahead! would do on their spare time and decided it should be mini golf. To fit to the style we made it physics-based and crazy with land mines and monster trucks familiar from the original game.

We started developing Drive Ahead! Minigolf with only one artist and one programmer but now our team consists of three artists, three programmers and a producer. We have one UI artist and two 3D artists that concentrate on creating content for the game. Two of our programmers are working hard on our online multiplayer version while one keeps updating the game with fun new features.

We have an active community so we wanted the players to be able to share their coolest moves from mini golf.

Drive Ahead! Minigolf is an AR game for iOS. It plays just like real minigolf and you use the device as the golf club by swinging the device. It can be played anywhere with up to four players on the same device and we are currently working on the online version of the game. This means you can soon play against anyone online.

We have an active community sharing and watching replay clips from Drive Ahead! so we wanted the players to be able to share their coolest moves from mini golf as well. You can instantly share moves through the game as GIF images.

Since the launch we have created fun visual themes, more content and polished the controls.The Halloween theme was the first update and we are now working on a winter update with a new snowy look and feel. We have completely re-designed the core loop and working on implementing it alongside with the online multiplayer.

The judges were as enthusiastic about the projects as the developers and they were eager to learn more and test the games.

We're fortunate that the active user base in Drive Ahead! games allows us to bring our players new content, even experimental stuff like AR games. The market is still developing with the new technology and we want to be the first developers out there to bring them fun and engaging gameplay to enjoy. It requires resources and it’s a tough new market but we believe in the possibilities it can bring.

The VR Indie Pitch was challenging, but the atmosphere was relaxed and friendly. Situations where you have to pitch your game can be very stressful but the way this pitch session was organised felt really nice once we got it going. The judges were as enthusiastic about the projects as the developers and they were eager to learn more and test the games. I enjoyed that; it’s great to show your projects to people that appreciate them.

This event helped me game design-wise in understanding some aspects about our game and we have gained visibility in the industry.

I personally have become better and more confident at performing and presenting for a live audience. You can always get better and the learning never stops. I believe this event has also helped me game design-wise in understanding some aspects about our game. As a game developer, you rarely have an opportunity to see people play your game. It was great to see people test it hands-on and see what they enjoyed and what should still be tweaked. We also got some valuable feedback from people who were testing our game and of course the judges. As a company, we believe we have gained visibility in the industry.

It’s great to see more players join the game every day as AR becomes more mainstream. We have some major updates coming to the game still this year - a new design providing an improved sense of progression and the online multiplayer I’ve mentioned earlier. Our future games at different stages of development are built with the Drive Ahead! brand, online multiplayer and AR. So stay tuned!