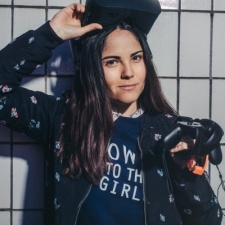 Faviana von Heijne: I’m Faviana von Heijne, co-founder and CEO of SVRVIVE Studios - one of Europe’s leading immersive game studios. We’re a team of 15 VR/AR devs exploring the potential of immersive media and creating games that evoke emotions and positively impact the players. We started the studio in May 2016 and have so far published one VR game - SVRVIVE: The Deus Helix - a mystery puzzle adventure for HTC Vive and Oculus Rift that’s been doing really well on the global Steam VR bestseller list and been named one of the best HTC Vive games of 2017 by PC advisor. We’re naturally super happy about that and we’ll soon be releasing more titles for multiple immersive platforms.

Our next titel is Kartong - Death by Cardboard!, a 'cute' maze stealth FPS that takes place inside a miniature cardboard city. You find yourself being the involuntary, and very small, test subject of an evil experiment, trying to make it through a cardboard city filled with traps and angry toys. The game is designed to let you either challenge your friends one level at a time, or try to make it through the entire city of Kartong and escape - all while experiencing a unique cardboard world. The game will be released for HTC Vive, Oculus Rift and PlayStation VR later this year.

It is naturally challenging to be one of the first studios focusing on the emerging VR/AR market, since there is no blueprint for how to create the best immersive games and since the market is in constant flux. However, that’s exactly why we’re doing it - we want to be part of the next phase of gaming and nudge that change in a positive direction. So far, we’ve been lucky to have investors who believe in us and players who enjoy our games, but I think we and all other indie developers in VR/AR will keep having challenges for some time to come.

How did you find the experience pitching as a part of the XR Indie Pitch?

It was a blast! It is always immensely rewarding to take our games on the road and get valuable feedback from industry experts and gamers alike. Since Kartong - Death by Cardboard! is still in development, the pitch also gave us some great insights into how to improve the experience even more.

To us, the honest reactions from gamers is the best thing we can get, and we truly got that by showcasing Kartong - Death by Cardboard! at the VR Indie Pitch. I just wish we could do one such pitch every week to get even more feedback and reactions!

What are your hopes for this game in the future, and do you have any plans for any future projects?

Kartong - Death by Cardboard! came to be after an internal game jam where our team came up with this new miniature world built from cardboard. Combining maze, stealth and FPS gameplay is new to us, so I think our humble hopes are simply that people will enjoy the game and that our team will grow by creating it. As for future projects, we are actually already working on a third title. I don’t want to say too much about it just yet, but I can tell you that we’ll be pushing the boundaries of immersive gaming and that we’re collaborating with top neuroscientists to create a game that hopefully will have a positive impact on the players in terms of empathy and compassion.