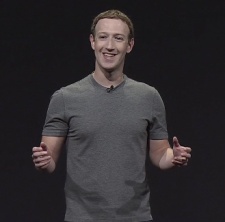 Facebook CEO Mark Zuckerberg’s introductory keynote at last week’s Oculus Connect 4 ran like an ‘in defence of VR’ monologue. While he was preaching to the converted, with the audience attending The San Jose McEnery Convention Center comprising XR industry professionals, Zuckerberg’s intention was clearly to clarify the technology’s purpose and potential to a wider audience through the media.

Too Crazy Or Complex

Saying that, “We’ll use VR to work, play and connect with each other,” he drew the analogy between VR and previous technology that, “Can seem too crazy or complex to start,” referencing the internet and smartphones as predecessors. Addressing many critics’ main objection to VR head on Zuckerberg said, “Some people say that VR is isolating, but it’s the opposite; it’s freeing”. While conceding that, “Today we need this big headset - that’s not great”, he went on to say that, “We’re working on it”.

The CEO also gave British grandmother, Dorothy Howard, her 15 minutes of fame with a short video revealing that while she is no longer fit to go on holiday, the 80-year-old now uses her Rift to take virtual trips instead.

A Force For Good

Speaking of next year’s new experience, Venues, that can bring thousands of people together to enjoy live sports, music and movies, “In ways that are impossible in the real world,” Zuckerberg said that, “Nothing is going to beat being there, [but] VR is going to make our reality that much better”.

And Facebook doesn’t just want a niche market; “We’re going to set a goal: we want to get a billion people in VR”, but Zuckerberg added that in doing so, “We have to make sure it’s a force for good and accessible to everyone”.

More Committed Than Ever

If there was any doubt about Zuckerberg’s conviction in the medium in light of consumer adoption failing to match up to analysts’ expectations, he made it clear that, “I am more committed than ever to the future of VR”.

Answering accusations of escapism, the CEO said, “It’s not about escaping reality – it’s about making it better... VR will change the way we see the world and it will make all our lives better”.