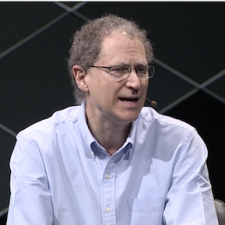 Sharing his thoughts about the future of immersive computing, Oculus’ Chief Scientist, Michael Abrash, is looking forward to what he calls, “The second great wave of VR”. As part of this, he envisions a virtual workspace in which he can have true flexibility. He believes the development community will drive the advancement of VR.

Speaking at last week’s Oculus Connect 4 event, Abrash said, “VR will be the most social thing that’s ever happened, because space won’t limit our interactions”.

He believes that, “It’s obvious that this is the next platform... The key is that it’s something that’s an important part of our life”. He drew the comparison that just as it’s been a long time since he hasn’t looked at his phone every day, VR will grow to the point where it, “Will be a primary way we connect”.

Abrash explained that today's headsets have a fixed distance of two metres but that, “Holography could be the ultimate answer” before going on to add, “Or an array of fine lenses. Or multiple planes. Or changing the focal depth to match where you’re looking.” So in his opinion, there isn’t a clear leader at this time. As he said, “Every one of them is difficult, but every one of them is possible. At some level we’re working with each of them. Who knows what the solution will be?”

Speaking about his team’s work and projected timelines for realising its potential across the projects over the next five years, Abrash suggested that research work is actually outstripping expectations when he said, “I might actually bump a few of them up”.

VR Is Its Own Killer App

The single most frequently asked question by sceptics of VR is where is the so-called killer app. Abrash’s riposte neatly sidesteps this saying, “What’s the killer app for reality? It’s all the things you can do”.

If you accept that reality is just a construct, then can what developers create be just as real? In Abrash’s opinion, “Life is having experiences with other people and when VR is good enough, anything is possible”.

Speaking to the audience at The San Jose McEnery Convention Center, Abrash said, “Everyone here is a pioneer. I don’t think you understand how big it’s going to be”.

If you want to work with Abrash in Oculus Research, he’s working on building the team and said, “We’re looking for the best people in the world”. Get your CV in now if you qualify...