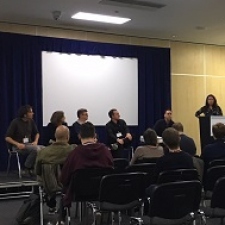 As investment in VR slows down, hardware sales underperform against forecasts and leading studios such as CCP pull back from XR, what advice did this industry panel have for indie devs at the London event?

The panel was chaired by Ella Romanos from Rocket Lolly Games and featured:

We need a publisher to get into this space who is a little experimental.

Romanos opened the session addressing the wider perception that VR is underperforming against analyst forecasts, asking the panel if the predictions were insane.

DR: [Referring to his presentation at XR Connects London] I said in January that Winter Is Coming. If you’re not too big you’re fine, there’s lots of work, but we need a publisher to get into this space who is a little experimental. This year and next, we need to just keep going...

TG: The potential for traction is becoming realistic now.

RGC: VR’s not quite as big as we thought right now, but it’s not necessarily bad for emerging technology.

MdR: VCs have all placed their bets from 2014-16, so they’re not going to place any additional bets in VR. [When asked where the money is coming from] Sony, Oculus and HTC are definitely funding content self-sustaining ecosystem. Brands.

There’s not much tech investment in MR in the UK. There is in AI, but not in visualisation.

SB: Working for enterprise clients - funding opportunities to develop technology that feeds back into what you’re working on.

DR: Building tools - when developing for a client, can you retain ownership of the IP? Or if you have to hand the code over, then you can develop your own project at the same time. Some skill that we learn how to do that another developer can’t.

DR: We’re very excited about standalone VR hardware. [Much of the] market doesn’t have an expensive PC or PlayStation and some are unwilling to shift away from a mobile brand they feel loyalty towards. I think of them like Nintendo’s GameBoy or DS; they’ll be established by next Christmas. PC VR set-ups so far are like Hi-Fi geeks who carefully choose amp and speakers, which is a small section of the Hi-Fi market.

Presence and immersion is last year; that’s what gets you into VR. The next step is true, meaningful, social experience in VR.

MdR: The market we’ve seen clearly points to the fact that people want first-person. People are interested in social experience. Presence and immersion is last year; that’s what gets you into VR. The next step is true, meaningful, social experience in VR. Every single concept we’re working or pitching on includes social.

DR: One of the things that will be big is how they integrate AI, whether for hand-tracking interfaces, or not knowing if a character you meet is another human or an NPC. The techniques of telling stories in VR are still being uncovered, which is an interesting space, although the budgets aren’t massive.

(The killer app) won’t be a game. It’s more about expressing yourself.

RGC: I’m always looking for pitches that understand the people they are for. Recognise that both the time and financial investment in VR means that the user will have higher expectations.

MdR: Symbiosis. When pitching to platform holders, work out why we’re highlighting their platform. Why they’re the only ones that can do

DR: If you can find the Snapchat of VR, then you’ll be very rich. [The killer app] won’t be a game. Snapchat isn’t a game. It’s more about expressing yourself as a person.

Discover the secret to marketing your new VR game