The Future Of VR Revealed At VR Connects San Francisco 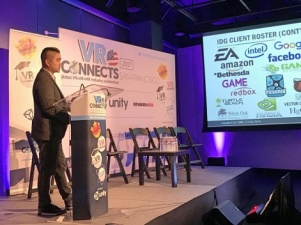 Last week in San Francisco, hundreds of people piled through the doors of the Bespoke space downtown to enjoy PG Connects and VR Connects. These two events were the latest in the popular industry-insider conferences, run by the company behind The Virtual Report – so obviously we were there meeting, greeting and learning.

Day one featured a VR Indie Pitch (won by Lebanese developer Game Cooks with their VR blaster Vindicta) as well as special sessions on user behaviour by Clemens Wangerin and Daniel Burwen giving us a taster session about understanding the business of content creation. The main VR/AR/MR track took place on day two, Wednesday 28th June, with 31 expert speakers and panellists giving the assembled folk an insight into the current immersive media landscape.

One of the most revealing talks was delivered by Yoshio Osaki of IDG Consulting, the experts in videogame business forecasting. He spoke at length about their analysis of the market and where he saw VR and VR going.

"We are two to three years away from critical mass, in terms of adoption," he said at the start, and his presentation explained how the market could diverge in a number of ways. IDG even gives the odds on certain outcomes in this way:

Other talks last week covered how AR could get the industry to $108billion by 2021 by Digi-Capital's Tim Merel and a talk by Jikhan Jung of Subdream Studios about fundraising for VR gaming studios.

"It was a great honour to be part of the team that put together the conference," says organiser Simon Drake. "Not only did we have a full day of high quality speakers, but all of these talks were well received – most were standing room only!"

He continues, "There were so many highlights, but some that instantly jump to mind include Rikard Steiber from HTC, Noah Falstein's dive into the link between psychology and VR, Brandon Laurino and Andrew Goldstein exploring the past and future of our industry, and of course exploring the life of an indie developer through two VR Indie Pitch finalists."

The next conference in this series, XR Connects, takes place in Helsinki in September and tickets are available now. It's also possible to speak there, if you have insight to share, and developers are also very welcome to enter their in-progress VR/AR/MR game projects in the VR Indie Pitch.