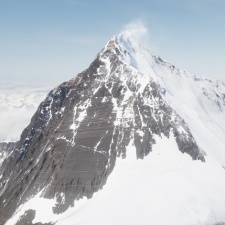 One of the many illuminating talks at VRDC, the VR/AR conference taking place in San Francisco ahead of the annual GDC event, was that given by Petur Thorarinsson of Solfar Studios. Everest VR was one of the early must-see experiences of the HTC Vive and the presentation at VRDC served as a making-of. Thorarinsson focussed specifically on the lessons his team learned about how to immerse people in an experience.

“How do we place you in an environment that has a really strong emotional resonance?” He asked. “We needed two or three reality cues that will sell it to you; convince you that you’re there. We had to think: what will convince your brain to fill in the rest of a scene?” It was also important to be historically accurate and true to the experience - for the sake of all the people who have been (and in some cases died) there in real life.

Cinematic sequences would prepare you for the upcoming climb. But they did this at first with a small 'theatre box' format, in slow, linear forward-moving shots. This was done specifically to avoid making you sick. You’re not dropped into the 360-degree immersion straight away, and you’re not subject to any acceleration. “Just be careful!” warned Thorarinsson. “Slow, forward shots, always moving parallel to the ground.” Then, when the location is established, the box pulls back to a fully immersive experience.

Give People Something To Hold Onto

The team found that creating virtual stabilisers helped people concentrate on the experience. The Khumbu Icefall gave new players a sense of vertigo. Players struggled with that scene because it was really difficult to cross the horizontal river at first – so the developers added guide ropes to hang on to. “It seemed to give players a sense of security,” said Thorarinsson, adding wryly, “In reality, they don’t do anything! You’re just closing your fists as you walk in the virtual space!”

But it demonstrates that the immersion is strong. The player is not in danger, of course. “But if we make it appear to wobble a bit, and we play the sound of wind, people suddenly need something to cling on to. And nobody in testing ever just let go and walked away into mid air, which of course they totally could!”

Use Gravity And Sound To Suggest Depth

The team employed a series of gravity-based cues and visual tricks to create a sense of verticality and depth. Flags and discarded equipment on the slope help give a sense of scale (and also helps with sense of progression – people could see they were passing objects in the medium distance). Falling icicles from the feet of people above you also help you understand which direction is down.

Breathing, footsteps and heartbeat sounds, particularly in stressful situations, adds to a stronger sense of presence too.

Some Cinematic Techinques Are Fine

As backpacks fall past you while you’re climbing, the experience slows to 'bullet time'. It’s a cinematic effect, but it, “doesn’t actually break immersion - people accepted the added drama as part of the experience.” One of the key pieces of feedback the team received was that hyperreal techniques for creating drama were completely accepted by the player and didn’t break the authenticity of the experience.

When a storm hits, the view fades to white and the noise fades out. And players understood clearly that this meant time had past.

They also sped time up for a 'dream sequence view' of the mountain at the summit, where day and night accelerate and the camera pans around to see the sky. “Time lapse honestly doesn’t break the immersion, it just enables you to ‘wonder’ in a way that is really unique,” Claimed Thorarinsson. Neither slowing down nor speeding up time broke the immersive VR effect, when used as part of the narrative of the experience.

Give Them A Meaningful Emotional Connection

When you’re standing on the final knife ridge, you notice that there are climbers standing beyond you trying to rest their hands on the ice. You can discover that it’s possible to do that too, and the team has received a lot of feedback about how much players enjoy getting to touch the ice. “People often stay and caress the space in front of them – no need to do that but it’s really common!” said Thorarinsson.

“We wanted you to have a meaningful thing happen on the mountain top” he continued, explaining how the adventure ends. “We had to find a way to introduce the summit and then accompany you as the sequence ends… We have never been there ourselves! So it felt disingenuous for us to say ‘it feels amazing up there!’ so we took the words of people who have actually been on the summit and decided to let them tell you.” Listening to these words as you watch the time lapse of the mountain gives people an emotional kick to accompany the visual and audio sensation of being there.

VRDC took place in San Francisco at the start of the week, ahead of the annual GDC event. Find out more about Everest VR at the official site. For more talks about VR development, get tickets ASAP to our very own VR Connects event this summer.

Jeremy Nathan Tisser interview: "VR is like Hollywood used to be"