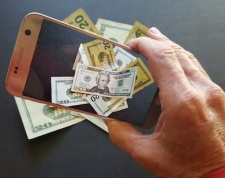 Venture capital firms are showing increasing interest in mobile AR, Computer Vision (CV) and Machine Learning (ML) as the new hot tickets, while interest in VR cools, according to a new report from Digi-Capital.

The research includes 30 interviews with venture capitals (VC) from Sand Hill Road and China, asking how the XR market has evolved and probing the current focus of funding. With investment in VR and AR reaching $1bn in the last financial quarter of this year - for a $2.5bn total this year - the interest in the market from both mainstream and specialist VCs has never been higher.

Digi-Capital's Managing Director, Tim Merel, told us that the consensus among the VCs canvassed for this report is that early stage markets like AR/VR take time to scale with a typical investment horizon of three to five years.

With companies such as Apple (ARKit), Google (ARCore) and Facebook (Camera Effects) bringing AR solutions to market just this year, Merel said, “Mobile AR is at a very early stage, and could see $50 to $100 million exits in the next 18 to 24 months. Dominant companies will take time to emerge… CV/ML is more advanced, and could see dominant companies in the medium-term.”

While mobile AR is delivering a new range of User Experiences (UX) and Interfaces (UI), the research found that VCs understand that it will take time for developers to learn what works and for consumers and enterprise to adopt mobile AR at scale. Digi-Capital’s base case is mobile AR revenue won’t really take off until 2019, despite an installed user base of 900 million by Q4 2018. It will take time for dominant companies to emerge in this space.

In comparison, CV/ML is powering a broad range of new applications beyond mobile AR and, being more advanced, could see dominant companies in the medium-term.

No Chicken And Egg For AR

During the interviews for the research, Menlo Ventures' Matt Murphy said, “The opportunity for developers with ARKit and ARCore is to leverage a market that is already at scale. They don’t have the chicken and egg problem that most new platforms face, with a huge total addressable market at launch”.

Niko Bonatsos, Managing Director at General Catalyst, believes that the User Experience (UX) is crucial to making AR a success. He said, "The first wave of mobile AR apps are largely derivative of related sectors rather than native mobile AR, and there’s also the physiology of UX to figure out. People don’t hold their phones up in front of their faces for long periods of time, so apps with high frequency, short sessions might prove successful.”

You'll find more information based on the research with further quotes from the 30 VCs who took part on Digi-Capital's site.