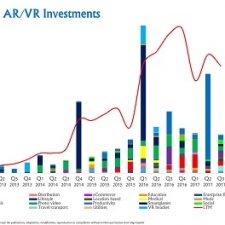 So Q3 wasn't a dip, so much as Q2 was unusually high.
The third quarter also marked the beginning of a transition from a previously VR driven investment market to a new mobile AR driven market. Where sentiment on VR softened in the first half of 2017, VC/corporate investors are now actively looking for mobile AR investment opportunities.

Softening VR sentiment in the first half of 2017 also reduced the number of active AR/VR investors, but mobile AR seems to be reversing that effect. It isn’t clear yet whether resurgent VC/corporate investment interest in mobile AR will also help smartglasses, premium VR or mobile VR startups doing the rounds on Sand Hill Road.

Where ARKit, ARCore and Camera Effects will have an installed base over 900 million by the end of 2018, it could take mobile AR startups another 12 months to scale in revenue terms. This means that VC and corporate investors will need to be realistic about the early stage mobile AR market, requiring patience while new portfolio companies build towards dominant positions.

You can find out more about AR/VR investment in Digi-Capital's new Augmented/Virtual Report and Deals Database Q4 2017.