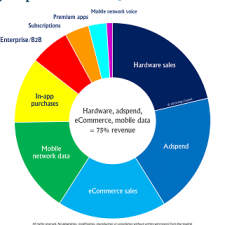 “VR will be big, AR will be bigger and take longer.” What sounded revolutionary when we first said it two years ago has become accepted wisdom. But the absolute performance of VR and AR in 2016 was not as important as how it changed the trajectory of the market. Where at the start of the year we thought 2016 could deliver $4.4 billion VR/AR revenue ($3.8 billion VR, $0.6 billion AR), the launch year’s issues resulted in only $2.7 billion VR revenue. This was counterbalanced by Pokémon Go’s outperformance, helping AR to an unexpected $1.2 billion revenue, for a total $3.9 billion VR/AR market in 2016 (we were 11% optimistic).

Mobile AR The Primary Driver
So now the market has actually launched and we have 12 months of real world performance with major tech players’ strategies emerging, our views on VR/AR growth have changed. A lot. Digi-Capital’s new Augmented/Virtual Reality Report 2017 base case is that Mobile AR could become the primary driver of a $108 billion VR/AR market by 2021 (underperform $94 billion, outperform $122 billion) with AR taking the lion’s share of $83 billion and VR $25 billion. Apple and Samsung could launch AR enabled phones in 2018 (underperform 2019, outperform 2017), making mobile AR part of the existing smartphone replacement cycle to deliver hundreds of millions of mobile AR users by 2021. There are major implications for Apple, Google, Facebook, Microsoft, Samsung and more.

A Thin Lens
Tim Merel, Founder and CEO of Eyetouch Reality and Digi-Capital observes, “Pokémon Go is a thin lens into the potential of mobile AR (even if industry insiders don’t like to call it that). The first step to true mobile AR was taken when Google launched its Tango AR phone with Lenovo. While that doesn’t look like the hero device mobile AR needs to take off yet, it points in the direction of the tech that Apple, Samsung and others could use to revitalize innovation and growth in the slowing smartphone market.”
Merel goes on to say, “Most developed mobile markets have hit saturation, with sales coming from consumers replacing their phones regularly despite not really needing to.” He concludes that, “AR phones could become the new hotness to drive mobile growth again. Who wants an old smartphone when you can have a magic window on the world?”

You can find all the detailed installed base and revenue forecasts in Digi-Capital’s new 121 page Augmented/Virtual Reality Report 2017.

The full article was first published on Digi-Capital, reproduced by kind permission.