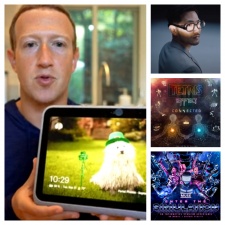 1) Facebook pitches Portal devices as the gateway to the metaverse

Grammy-nominated singer teams up with pop art collective and Verizon

The latest review featuring VR, AR and MR experiences and hardware worthy of your attention

These all-time all-star stories are some of the most popular articles from our archives: