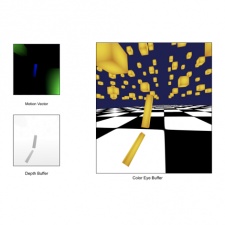 First announced during Facebook Connect 21 [see our full report], Application SpaceWarp (AppSW) optimisation can unlock up to 70 per cent additional compute under OpenXR. Meta has revealed more information now it's live as part of the recent V34 OS update and SDK release.

Using AppSW, applications can now render at half the display refresh rate, meaning that software only needs to render 45 frames to achieve that magic 90 FPS, for example. AppSW supports 72/90/120 refresh rates on both Quest and Quest 2.

That doesn't equate to doubling the computation budget though, as AppSW needs to render motion vector and depth buffers in addition to the standard eye buffer. Initial testing using Unreal Engine 4 titles returned up to 70% more usable compute budget.

AppSW works by rendering the application analytically, which is more reliable than estimates based on historical frames - as used in the older Asynchronous SpaceWarp for PC VR - while also enabling higher resolution. The motion vector and depth data can be much lower resolution than the colour eye buffer, which is one of the reasons why motion vector generation overhead is very low.

In a recent blog post, Meta claims that, "From a pure HMD latency point of view, we can even say AppSW apps have better latency than full FPS applications without AppSW when using PTW".