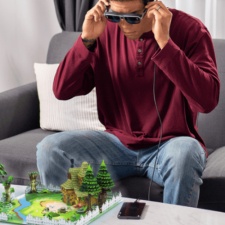 Qualcomm Technologies has today revealed the Snapdragon Spaces XR Developer Platform, a headworn Augmented Reality (AR) developer kit to enable the creation of immersive experiences that seamlessly blur the lines between our physical and digital realities.

Qualcomm also announced the acquisition of the team and technology assets from HINS SAS and its wholly owned subsidiary, Clay AIR, a provider of hand tracking and gesture recognition solutions. They join Wikitude in working on the transition from smartphone to headworn AR.

Snapdragon Spaces is based on the Khronos OpenXR specification to enable application portability and is the first headworn AR platform optimized for AR glasses tethered to smartphones with an OpenXR conformant runtime.

This new platform offers machine perception technology optimised for performance and low power for the next generation of AR glasses. It provides environmental and user understanding capabilities that give developers the tools to create headworn AR experiences that can sense and intelligently interact with the user and adapt to their physical indoor spaces.

“The Snapdragon Spaces XR Developer Platform underscores our commitment to empowering developers to explore bravely and create confidently, paving the way to a new frontier of spatial computing,” said Hugo Swart, vice president and general manager of XR, Qualcomm Technologies. He went on to say that it is, “Designed to support the democratisation of XR by taking a horizontal, open channel approach so developers can rapidly bring their ideas to life and reach a wide range of end users. We welcome developers to join us in this journey to reimagine reality.”

That journey starts today with the launch of the Pathfinder Program, designed to support AR innovators through early access to platform technology, project funding, co-marketing and promotion, as well as hardware development kits to help grow an active community of Snapdragon Spaces developers. Find out more here.