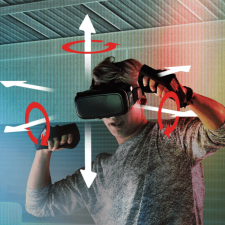 Qualcomm has revealed its new newest addition to the Snapdragon family, the Snapdragon 835 processor at CES 2017 in Las Vegas. Snapdragon 835 is 35 per cent smaller and uses 25 per cent less power than previous designs, and is built to deliver high-end mobile performance and provide improved support for mobile AR and VR experiences. Snapdragon 835 is Qualcomm’s first 10 nm chip, so whilst it’s the company’s most powerful, it’s also the smallest yet, making it perfect for wearable technology such as mobile VR headsets.

Snapdragon 835 is designed to meet VR processing demands within strict thermal and power constraints, offering 25 per cent faster 3D graphic rendering and 60 times more display colours when compared to the previous version. To generate immersive sounds, the processor supports 3D positional audio, improved Signal-to-Noise ratio (SNR), and native Direct-Stream Digital (DSD) for high fidelity playback. To reduce the problem of motion sickness that is so prominent in mobile VR, Snapdragon 285 is engineered to produce a 20 per cent reduction in motion-to-photon latency and six-degrees-of-freedom (6DOF) for more precise motion tracking.

For processing power, the chip uses Qualcomm’s most power-efficient CPU to date, the Qualcomm Kryo 280, which features independent efficiency and power clusters, each designed to optimise the user experience.

A Focus On AR And VR

With both eyes on the VR future, the processor supports the latest mobile VR standard offered by Google’s recently launched Daydream platform.