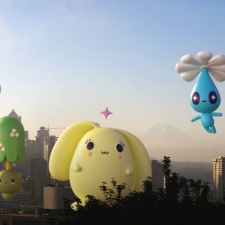 Using any iPhone to snap the signage, users will enter an immersive AR experience to explore larger-than-life art, listen to Halsey’s new track, Darling, search for the hidden 13 and share on Twitter for a chance to win a new iPhone.

Following the real-world pilot, international users can now participate online by generating FriendsWithYou character art and sharing on Twitter for a chance to win an iPhone 13 Pro. The contest ends this Friday, September 24th.