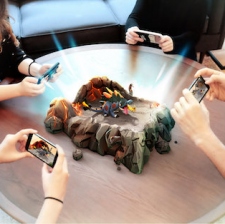 The Cambridge-based developer has agreed to license Enhanced Reality Engine to Crytek to add to their engines capabilities, with further details of their partnership to be announced in the coming months.

All The Bells And Whistles

PlayFusion recently announced a partnership with Games Workshop to develop a new AR, physical and digital trading card game based on the Warhammer IP and is also set to release a digital edition of the physical Lightseekers trading card game in June 2018.