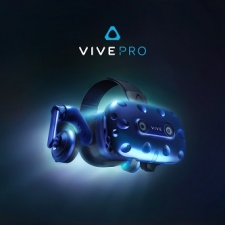 HTC announced at CES that it is to release a higher resolution version of its VR headset this quarter, the Vive Pro. The new HMD is pitched as ‘A new HMD upgrade from Vive, built for VR enthusiasts and enterprise users who want the best display and audio for their VR experiences’.

Vive Pro includes dual-OLED displays for a crisp picture resolution of 2,880 x 1,600 combined, a 78% increase in resolution over the current Vive. The consensus among those who have tried the new hardware at the show is that it considerably reduces the screen door effect, which has been the main criticism from existing users.

The ‘upgraded’ headset also features integrated, high-performance headphones with a built-in amplifier to offer a heightened sense of presence and an overall richer sound. There are volume controls and a mute button on the earpieces for the new dual microphones with active noise cancellation. HTC has also added a second front-facing camera that could be use to pass through video, enabling it to be used for stereo AR experiences.

The new headstrap builds on improvements for the deluxe audio strap to offer enhanced ergonomics and comfort, including a sizing dial for a more balanced headset that decreases weight on the front.

Initially shipping as a headset-only product this quarter, the Pro is intended for use with existing base stations and controllers, with the option for users to add-on the version 2.0 base stations when they are available later this year. This hardware set-up will be able to track up to a 10 x 10m area with four stations. A headset and 2.0 bases bundle will also be offered in the future.

Daniel O’Brien, General Manager US at Vive said, “There’s a clear need in the VR market for a premium VR experience with high resolution display, integrated audio and the best components available today in a headset. Vive Pro offers an immediate upgrade for both VR enthusiasts and enterprises that want to utilise the best VR experience.”

Just one bit of information wasn’t mentioned in the press briefing: price. Vive may have recently seen a price cut to compete with Oculus Rift, but the Pro will be offered to consumers alongside the existing hardware, presumably at a premium price point to match its 'premium' status. Between the ‘Pro’ nomenclature and the repeated statement that the new HMD is aimed at ‘enthusiasts’ and ‘enterprises’, we expect an SRP in excess of the original Vive’s $799 at launch.