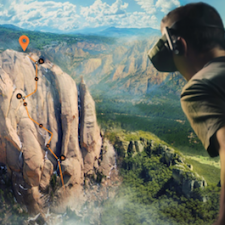 Adidas has launched a VR experience following climbers Delaney Miller and Ben Rueck as they take on one of the hardest climbs of the Bavella mountain range in Corsica.

The Delicatessen retail experience is named after the rough-hewn granite ‘Delicatessen’ (8b/b+) route to nearly 1,040 meters above sea level within the Punta Du Corbi. For this ascent, the climbers were accompanied by the 16 GoPros that comprise the Google Jump 8k resolution stereoscopic rig, as well as a team of pioneering photographers and software technicians.

Stuart Wells, Global Director of Brand Marketing for adidas said, “Our athletes are fueled by creativity and are always pushing the boundaries of what is possible, and we’re constantly testing the limits of how we can use new technologies to convey the exploits of our athletes.

“With immersive technologies like VR, we’re able to replicate outdoor sports experiences that customers might not consider otherwise. With this, we’re able to introduce how exhilarating outdoor climbing can be and help them make informed choices about adidas TERREX products.”

To create the experience, adidas partnered with London-based VR agency, Somewhere Else, interactive producers BYO,  and the 3Dar animation studio from Buenos Aires.

Ramy Elnagar, Co-Founder at Somewhere Else and the project’s Creative Director said, "Along with the creative team at adidas, we feel we were able to give urban thrillseekers an experience that taps into their inner adrenaline junkie and complements their love of the outdoors. This is just the beginning of a long line of brand narratives deeply magnified through the lens of immersive technologies."

Delicatessen is now on show to the public in bespoke installation zones outside Chinese adidas retail stores. The experience was launched in Harbin on the 15th September and is part of a retail roadshow that will tour 10 key cities in China until the end of November.

The British public can view the experience when it’s showcased at the Kendal Mountain Festival between 16th and 19th November, with a Google Expedition soon to launch.

Coca-Cola Turns To VR And AR For Halloween

How VR Is Changing The Way We Book Holidays