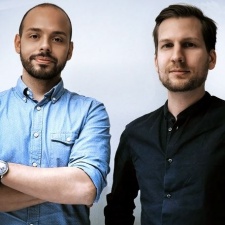 Sweden’s Hatrabbit Entertainment co-founders, Andreas Chrysovitsanos and Joakim Svärling, talk to us about being pioneers, escapists and dreamers, and the importance of finding out fast what the public enjoys.

But it’s always been about one thing - creating those magic moments that you feel and remember. Everyone knows what it’s like sitting in a car a rainy day, hearing the wipers work on the windscreen hammered by heavy rain and the radio talking in the background. This is a moment we tried to capture in a racing game back in 2003.

For us it’s always been more than the gameplay and polygons. VR is a dream come true for escapists, like ourselves. When the Rift and Vive started showing potential, we knew this was the right forum for us. Starting our own business and pursuing that dream actually felt like a natural step.

There is a strong mutual trust and understanding between all of us and this lets us spend time focusing on the right things.

How many people are on your team and what are their backgrounds? You've all worked at some big companies I think?

As of today, we’re three owners plus our investor. We all have backgrounds from both DICE and Rovio and we have been hands-on creating and managing some of the world's biggest AAA and mobile franchises for 17 years, including Battlefield and Angry Birds. Me and Joakim were part of the management team for Rovio Stockholm where we helped building the studio, but also created the original concept for Angry Birds 2.

Creating a solid foundation for Hatrabbit has always been key to us. Knowing each other so well, professionally, is definitely a big help going forward. The same goes for our partner and investor Karl Magnus Troedsson (former GM at DICE, VP Group Strategy at EA and today partner in game publisher Raw Fury). There is a strong mutual trust and understanding between all of us and this lets us spend time focusing on the right things.

Recently, we picked up three very talented guys from Sweden’s leading game dev schools in order to help us with our future plans. Being initially small and flexible is definitely part of our strategy at the moment, but we do want to grow as a company long term.

Instead of aiming to create the big blockbuster directly, we validate our ideas early on and throw away what doesn’t work.

You have a rapid-development process. What's your philosophy for creating games?

To build a game, you obviously need to put a lot of heart into the design. But in a sense, we already take that part for granted. What we’re experimenting with is how to be free and creative but within a proven, successful framework.

Our philosophy around game creation is that we want to validate our ideas against an audience as fast as possible in order to then develop them further. It’s easy as developers to get stuck with an idea you think is cool without validating if anyone else likes it. We want to get community feedback and hear what gamers want to see and play. In order to do so, we need to develop and launch interesting concepts fast.

Our goal right now is to create a game portfolio similar to Pixar shorts. The mentality is that each short could be a snippet of a bigger production. Instead of aiming to create the big blockbuster directly, we validate our ideas early on and throw away what doesn’t work. At the same time, we can develop team skills and be more adaptive.

Looking at VR games today, they’re magical in many ways, but the numbers of users are still very limited. There are still not enough customers to make a 20-plus developers business sustainable in VR. The best examples contradicting this statement are still exceptions. Our approach is not to limit ourselves to VR and not build our studio around one game idea. By creating many smaller experiences that can be validated early and played cross platform, we hope to convert players to the new medium and also grow our audience.

What attracts you to developing VR games?

Just being able to step into the worlds we’re designing is beyond magical. While inside, anything is possible. Yes, it’s a cliché, but a very true one this time. When building Merry Snowballs, we had one guy being inside the game world, giving directions and the other one moving around stuff in the game engine. Pretty insane.

VR technology is evolving all the time. But just thinking of what’s actually possible in a few years’ time is mind-blowing. By then, we’ll laugh at the hardware of today but also remind ourselves how and when the era of immersive entertainment started. And we can say we were pioneers.

Tell us a little about Merry Snowballs. Why did you build it? What's the game's unique experience?

Merry Snowballs was the first game we built with the quick prototype mindset. We were deep down in discussions with potential investors and felt an urge to try our skills and release a game before Christmas. Said and done, it took four weeks for the two of us to build it from scratch and launch it on Steam.

This includes setting up the Steam store, creating trailers, key art and whatnot. The goal with the game was never to become rich and famous, it was to get some real numbers from the market, not just playing the guessing game. It also taught us many relevant lessons that we’re bringing with us to our upcoming titles. Above all, it was an acknowledgement showing what we were capable of in that short amount of time.

Now we spent three extra months this fall to update the game and launch it on six different platforms in order to learn more about mobile VR, to explore ads and monetisation on mobile, but also to get to know and grow a bigger audience. This includes Oculus Gear, Google Daydream, Google Cardboard, Android Mobile/Non-VR, Oculus Rift and HTC Vive.

What we think sets this game apart from others is the combination of appealing visuals, relatable theme and accessible gameplay. It really is a feel-good game for the whole family and something you can try on anyone in order to showcase VR.

Once again, the Pixar reference would fit nicely here. When you think of their movies, you think of movies that appeal to both grown-ups and kids and we think this game has the same qualities. That’s also why we wanted to release it for free on mobile. Hopefully, people like it and want to see more of our games in the future!

The biggest challenge was to develop the game from the high-end version for Vive and push it to six different platforms within three months.

What are the challenges of building a mobile VR game?

Mobile VR is, of course, more limited in performance, but also when it comes to controls compared to the high-end platforms. But limitations can also force developers to simplify things. We strongly believe that limitations make people more creative.

The biggest challenge for us was to develop the game from the initial high-end version for Vive and push it to six different platforms within a timeframe of three months. We needed to adapt the game with fitting control schemes for each platform, integrate different advertising platforms, think different business models, adapt the gameplay, set up all the different stores etc. Adapting the visuals wasn’t as big of a hurdle as we thought and that’s mostly due to the fairly simple art design that the original game had from the start.

What other platforms are you building games for?

Right now, our main focus is building for mobile VR/AR hardware, but we try to be open to game ideas that can be played cross-platform. We want to attract a wide audience and with that in mind, we don’t want to restrict ourselves to one platform or technology. Reaching more people increases the chance of converting those with no experience of VR to the new medium.

You're attending conferences and conventions at the moment. We saw you at XR Connects in Helsinki, for instance. What's the response to the Merry Snowballs game been like so far?

From the very start, the feedback has been very positive. People really like the style and tone, but also the fact that it’s easy to understand and play. When we mention the development time, people are amazed and have a hard time understanding how we could make something with this quality so fast!

We wanted to build a game that was very inviting and friendly and that probably helps a lot. Creating something likeable isn’t always easy; people have a lot of opinions, but selling on humor is often a good start.

What's next for Hatrabbit? What game will you be releasing after Merry Snowballs?

We’re looking forward to presenting some nice ideas we’ve been carrying with us for a while. We’re putting more of the paperwork aside just to focus on the portfolio. We have a few favourites and they will definitely show new sides of Hatrabbit. After all, we’re not a snowball fighting game-studio. We want to show we can do some real magic.

Aside from that, we are also talking with a lot of interesting partners both from the tech side but also from the creative and gaming side. We want to collaborate with others as long as it’s not just pure contracting work. We want to build brand value and are looking for partnerships where we can find a win-win situation for both parties.

There will always be room for the dreamers, who just want to escape from that real world.

Will VR become a mainstream entertainment platform in the near future? What does the industry need to happen for this to be the case?

VR had its media peak like a year ago and was followed by the promise of AR soon after. Both mediums are still growing strong and they will have their loyal audience. When talking about mainstream, anyone comparing numbers with mobile entertainment and free to play games will likely get disappointed.

The sessioning, when and how we play the games, is totally different. A TV, for example, is mainstream but you don’t use it all the time. The VR developers have to find the right slice of time that people want to spend in VR and the right type of content that can’t be matched anywhere else. When we see games being playable using smart glasses on top of the real world, the big movement will come. But there will always be room for the dreamers, who just want to escape from that real world. Escapists like us.

What's Hatrabbit's ambition for the next 12 months?

Try It Out And See Where It Goes...