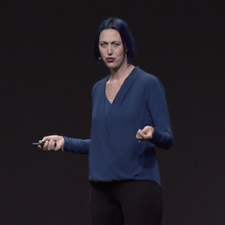 Product Manager, Christina Womack, spoke at Oculus Connect 4 about the social side of VR saying that the, “Most memorable experiences are with friends or family”.

She revealed a new system for creating avatars that includes the ability to choose skin, clothing and hair colour independently, as well as unlockable custom clothing to match a game or app offering, “Trillions of permutations”.

Will Steptoe joined Womack as an onscreen avatar to demonstrate a new range of mouth animations using a lipsynch library, as well as eye animations that track interesting objects in the scene around the user.

These avatars will reach both Rift and mobile next year, with cross-platform compatibility across Steam and Daydream.

Online safety is a genuine concern for many social VR users, so Oculus is providing platform-level safety tools like blocking and reporting. Womack explained this as, “Built-in best practices that carry from app to app; Whoever I blocked can be blocked everywhere”.

The same API also enables users to add friends and this functionality will be available from early 2018.

Rachel Franklin Head of Social VR demoed her team’s work, revealing that the Rift’s Facebook Spaces is coming to, “Other platforms” soon.

We also learned that Spaces is getting Live 360 videos and Quill art, as well as Facebook 3D posts that enable creators to share 3D models created in VR on Facebook, as well as into AR.