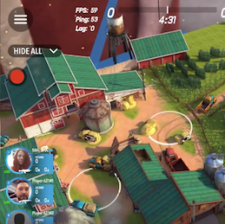 In a breathless post on their Facebook page, @GunsGame literally shouts, “FUTURE IS NOW!” before explaining that users can now watch live matches played out on their coffee table from any angle. You can immediately see how this would help competitors to quickly learn new maps from another perspective.

The developers said that, “AR spectating is such an authentic, innovative and comfortable experience, that we're certain - this is the future of eSports!” The AR functionality is limited to select matches at the moment, but the intent is for all Guns of Boom broadcasts to be AR in the future.

Last month, the title reached more than 10 million downloads just over two months after it launched worldwide, garnering a wealth of five-star reviews along the way.

Guns of Boom is available now on iOS and Adroid.

AR Is A Long-term Opportunity For Mobile Gaming

Clash Of Clans Gets AR Experience