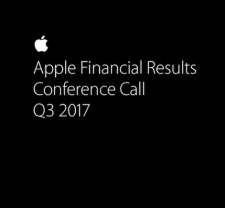 Apple’s projected earnings for the next quarter show anticipated revenue of up to $7bn more than the quarter that ended on 1st July. Given that the next quarter includes September – when Apple has historically released new iPhone hardware – this increase suggests that the long awaited AR-ready iPhone 8 could be here next month.

The figures were announced during Apple’s earnings call yesterday, where they disclosed financial results of $45.4 billion for Q3, to end of June. CEO Tim Cook said, “We’re happy to report our third consecutive quarter of accelerating growth and an all-time quarterly record for Services revenue”.

iPhone 8 And AR This Autumn?

Looking ahead, Apple has issued guidance for its fiscal 2017 fourth quarter, with anticipated revenue between $49 billion and $52 billion – an approximate increase of 10% on the preceding quarter. Analysts have been quick to point out these numbers are most likely explained by a new iPhone.

While a new handset could be an addition to the iPhone 7 and 7 Plus family, such as an S or SE model - as they did with iPhone 6 - we’re hoping that it will be the long-awaited AR-ready iPhone 8. ARKit was released to developers this summer as part of the iOS 11 update, which has a scheduled public release ‘this fall’.

A September iPhone release and its accompanying iOS update with AR functionality makes forthcoming event, XR Connects Helsinki 2017, an indispensible diary date on the 19th and 20th September. For expert insight into the future of AR - as well as VR and MR - from more than 60 speakers, register now.