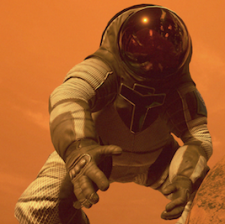 Built to be the most realistic Mars VR experience to date, Mars 2030 includes a range of features designed to blur the line between science, engineering and entertainment.

Terrain is modelled from a custom HI-RISE conversion, integrating real-world Mars Reconnaissance Orbiter data into the Unreal Engine 4 3D graphics engine for crisp framerates and up to 8K resolution.

The experience utilizes ambisonic audio filtered to match Mars’ atmospheric pressure and sound propagation, alongside an original score from the London Symphony Orchestra that features situational music cues designed to heighten the emotion of exploring the Red Planet.

One Small Step For VR

“Since its inception, Fusion has made experimentation with new forms of storytelling like Mars 2030 a priority. We know young audiences are inherently curious, which makes this immersive VR project an exciting first step for us,” said Julian Reyes, Director of VR/AR at FMG Studios. “It’s been humbling to collaborate with some of the leading authorities on Mars human mission planning, weaving their exciting research into our experience and providing a glimpse of Martian contact to the first generation of explorers who will actually set foot on Mars.”