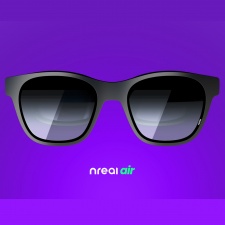 Looking very much like a pair of conventional sunglasses - also much like the newly launched Facebook Stories by Ray-Ban - the Airs take a different approach and are intended as an affordable way for consumers to watch 2D and 3D video content from a tethered smartphone.

Compatible with both iOS and Android devices, the Airs will also run on Nebula as per Nreal's existing Light glasses. This new hardware fares well against its established sibling in terms of display, with a higher pixel density of 49 PPD, as well as a faster screen refresh rate of 90Hz.

The field of view is down however, from 52 to 46 degrees. That's still enough for Nreal to state that the user will experience the equivalent of a 130-inch screen at a distance of three meters, or a 201-inch screen at six meters.

With neither an integrated outward-facing camera nor external trackers, the Airs are lightweight at 77g, but not capable of 'true' augmented reality in terms of placing objects relative to the outside world. As such, users won't be able to view the displayed image from a range of angles as they physically move - the 'screen' will remain at a fixed viewpoint relative to the hardware.

There will be the option for local shared experiences, whereby multiple Air headsets can display the same content.

Nreal CEO Chi Xu revealed that, "In Korea we’ve found that 78% of our users use Nreal Light to watch streaming content”. With the functionality limited to displaying video and phone apps, there's no need to include 6 Degrees-of-Freedom (6DOF) tech, so the Airs are strictly a 3DOF affair, considerably reducing the overall retail price.

The cost to consumer has yet to be revealed, while a statement from the company tells us that prices, "Will be determined by local carrier partners but will retail at a fraction of the price of Nreal Light".

The Nreal Air glasses will launch in December this year in Japan, China and South Korea, in partnership with local network carriers. With Nreal having just secured an additional $100 million investment, intended to fund international expansion, a release in further territories is expected next year, with Nreal saying that America will be a 'major market'.