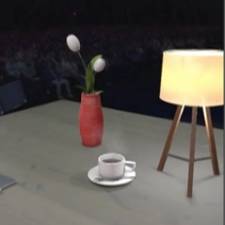 Apple revealed at today’s WWDC that iOS 11 for iPad brings AR to the Apple mobile ecosystem, as the Cupertino company announced its all-new ARKit for iOS devices.

With a carefully phrased sideswipe at Apple competitors’ recent, ‘Carefully edited videos’, today’s onstage demo showed a steaming cup of coffee being placed on a table top and realtime manipulation of the scene, including dynamic light and shade from a table lamp that was placed in the environment. Apple said this was possible through fast and stable motion tracking that finds planes such as floors and tables, as well as estimating ambient light.

ARKit integrates with third party frameworks to help with rendering, as well as using the hardware’s cameras, CPU, GPU and motion sensors. Apple made the claim that, 'You have millions of iphones and ipads that are capable of AR - overnight, ARKit delivers the largest AR platform in the world.'

The bold claim that, ‘It’s AR like you’ve never seen it before’, prefaced a demo by Alasdair Coull, Creative Director at Peter Jackson’s production company, Wingnut AR. In his words, “With ARKit, you don’t need special kit or markers – it just works”; how very Apple!

The wasteland sci-fi scene and spaceships that followed were rendered in real-time using Unreal Engine 4, including one victim that plummeted off the table and into the abyss of the stage floor. Coull exclaimed that, “With ARKit, it’s like you’re the director of your own experience”, going on to say that, “It’s a real game changer”.

iOS 11 will be a free upgrade to existing users, ‘this fall’, with developer access by the end of the month.

New pictures from the iOS 11 / AR presentation at WWDC: