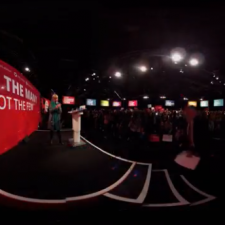 Jeremy Corbyn launched the Labour Party’s general election campaign in Manchester this Wednesday. Mindful that many potential voters were unable to attend in person, Labour published a 360 video of the event the following day. At just 2:46 duration, the video can’t capture the whole show, but it demonstrates a willingness to use the technology to engage with the public. On his Facebook page, Corbyn told his 870,000 followers that, “If you missed our General Election campaign launch, here's the next best thing: a 360 experience of it.”

In a prepared statement, Corbyn said, “I’m embracing new technology in Labour’s fight to form a government for the many not the few.” He went on to add, “Through the power of 360 degree video, Labour is offering anyone with internet access the opportunity to experience our launch event as if they were there.”

The filming and post-production work was done by Clerkenwell-based production company Room One Films.

Of course, no political communication is complete without a dig at the competition so Corbyn couldn’t resist saying, “Unlike Theresa May, Labour has nothing to hide at our events. People can see the packed room, they can see the media, and even get a sneak peek of the backstage area.” But in his own words, “This is accessible, participatory politics for the 21st century.”

American voters may have been able to watch last year’s presidential debates in VR, but the Labour Party is claiming a political first, saying this is the first time 360 video has been used in a general election and that they are using, ‘Innovative technology to reach people who have been disillusioned and alienated by politics’.