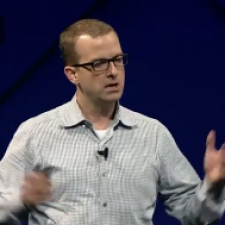 CTO Mike Schroepfer kicked off day two of Facebook’s annual F8 developer conference saying, “Today’s a fun day because we get to talk about the future”. He explained that the company’s 10-year roadmap is based around three main pillars:

After opening with a description of the ways that Facebook is improving connectivity – including millimetre wave technology – he expanded on AI, noting that, “Computer vision is just one part of the overall puzzle... We want to build truly intelligent systems that are useful to the things you want to do every day”.

Two examples of the kind of intelligent systems that he alluded to included help making decisions such as who to go to the cinema with or finding clubs to join. To enable systems to do this, Schroepfer said that we need to teach computers, “To learn and understand the world around us”.

The CTO cited his favourite application of this to date as the auto-caption feature for photos shared on Facebook, which has improved over the last 12 months to produce in his words, “Much more natural captions now”.

Interestingly, he also said that, “We need to teach them to do something all of you do every day; predict the future”, with the example of a bottle of water teetering on the edge of a table. This is how it will know how to answer the next question you’re going to ask.

A Big Year For VR

Schroepfer said that it’s been a big year for VR – quite the understatement! – and namechecked games such as The Climb, Job Simulator, and Robo Recall. He also highlighted non-games applications such as sculpting, painting, exploring the International Space Station and the work of organisations such as the Walk Again Project.

He claimed that, “We’re maybe the only company investing in VR across the spectrum. We’re investing in the high-end and PC, in research, content, platforms and software. We’re trying to drive adoption by building systems that are easy to use and low cost”.

Moving on to video, Schroepfer revealed that people are sharing tens of millions of 360 videos on Facebook. To supercharge this, he announced that everyone attending F8 would receive a free Giroptic Io 360 camera for iOS and Android.

“We want to push the immersion chain... so that in VR you feel like you’re really there”, which is why they released last year’s Surround 360 V1 camera, but he added that, “We’re not fully immersive”. Moving on from a locked camera perspective, Schroepfer announced the second generation X24 and X6 cameras designed in partnership with Flir.

This new system maximises pixel overlap on every part of the sphere, combined with computer vision to create a per-pixel depth map to solve the ‘6DoF problem’. This means that viewers can view perspectives of a scene that were not captured and did not exist before.

Schroepfer announced that this tech would not come with a 'lock-in to proprietary back-end systems'. He said that creators will be able to, “Use your tool of choice” before going so far as to say that, “We’re going to make it easy for people to buy or rent these cameras”.

But the familiar F8 message that we’re far from what the technology will be able to achieve is coming over loud and clear once more with the message that, “VR is on a 10-year roadmap... because we’re far from our goal.” But as Schroepfer said, “The good news is that we have line of sight of these problems...”

We’ll share more news from Facebook’s F8 event with you tomorrow – including deep learning, the next stage of personal computing, and control without controllers.