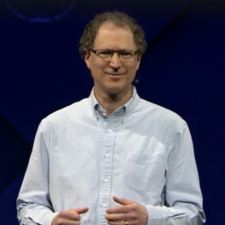 As Chief Scientist of Oculus Research, Michael Abrash, said at this week’s F8 event in San Jose, “What we all want is AR glasses... They aren’t here yet, but they’re on the way and when they arrive, they will be one of the great transformational technologies of the next 50 years”.

Abrash sees AR ushering in a new wave of computer technology that he calls virtual computing and he predicts that its impact may be even greater than personal computing. He believes that in 20 to 30 years, “Instead of carrying stylish smartphones everywhere, we’ll wear stylish glasses”. And they won’t be reserved for special occasions or events, as Abrash said that, “We’ll wear them all day and use them in almost every aspect of our lives.”

Social acceptability is an absolute requirement for anything we wear in public.

We’ve already seen divergent tech paths between the likes of Oculus Rift’s VR and Microsoft Hololens’ AR and Abrash believes this distinction will remain as the technology develops; “In the nearer term, due to technological constraints, AR and VR will follow separate paths towards that Mixed Reality future.” But ultimately, “The distinction between AR and VR will vanish... The real and virtual worlds will just mix and match throughout the day according to our needs”.

Abrash observed that, “VR will offer increasingly convincing experiences... The most immersive way to interact with the virtual world and it will revolutionise how we work and play”. But he acknowledged that VR isn’t suited to ‘always-on, go-everywhere mixed reality’ – that is the realm of AR. But today’s heavy headsets will never see mass adoption as, “Social acceptability is an absolute requirement for anything we wear in public... We’re going to need transparent glasses”.

The Chief Scientist anticipates the technology will only ever enter the mainstream with something he refers to as ‘Full AR’, by which he means, “Augmentation that enhances your vision and hearing seamlessly, that makes you smarter and more capable, that are light, comfortable, stylish, power efficient and social acceptable enough to accompany you everywhere you go.”

One of the problems of looking into the future is that it doesn’t yet exist.

Unlike the other presentations at this year’s F8, Abrash had no hardware demo or footage to show because, “One of the problems of looking into the future is that it doesn’t yet exist”. But that didn’t dampen his enthusiasm as he said, “It may take 5 or 10 years or even longer, but they will become a vital part of our everyday lives and that will create tremendous opportunities for everyone”.

Abrash pointed out that most people already have constant access to the virtual world through two-dimensional surfaces such as computers and tablets while via smartphones, “Every one of us has a virtual portal in our pocket”. But Abrash believes, “We can do better... Rather than looking at that virtual ocean through windows, we can swim in it like fish. And that’s what AR is all about.”

Abrash’s vision for AR and VR isn’t restricted to sight alone; he wants to, “See, hear, feel, smell and taste the virtual world. If we can do that, it would simply become part of our reality”. He expects that, “The true breakthrough will come when the real and virtual worlds can mix freely... so it simply becomes part of our everyday reality”

People with AR glasses will be the smartest, most productive, best-connected people around.

Not An Overnight Success

But that won’t happen overnight. While VR hardware is now widely available, the technical challenges in creating AR glasses are much greater. As Abrash said, “The set of technologies required to build them doesn’t exist... Every area requires technology that is beyond today’s state of the art”. He believes it will take at least five years for AR to become mainstream and many more to reach its potential.

Abrash gave special mention to the way that we will interact with this technology saying, “AR will involve the greatest leap in the nature of human-computer interaction since the mouse and GUI.” He believes that the ultimate would be a direct brain-computer connection. (See what Regina Dugan, VP of Engineering and Head of Building 8 had to say on this at F8 here.)

But for all these challenges, Abrash said, “Unless AR glasses good enough for broad consumer use are impossible, they will become a reality in the not too distant future”. And beyond that, “People with AR glasses will be the smartest, most productive, best-connected people around”.

Virtual computing will change everything.

Natives In A New World

Abrash believes that virtual computing will make us, “Natives in a new world, one that combines the best of both real and virtual. A world in which we have tightly coupled superpowers of perception; a tireless assistant, always ready to help us; and the ability to effortlessly transcend time and space and connect with one another”.

“One day, before long, virtual computing will change everything.”