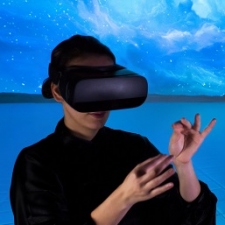 Leap Motion has announced the Leap Motion Mobile Platform, a combination of the company’s software and hardware built for untethered, battery-powered VR and AR devices which will bring a motion tracking platform to mobile VR.

Leap motion’s tracking technology allows users to see their hands in VR and use them as a controller; every movement of the hands is tracked, making for an intricate system that allows much more precise control than usual.

Bringing this complex technology to the mobile platform has been no easy task, according David Holz, CTO and Co-founder at Leap Motion who said, “The challenges to build a tracking platform in this space have been immense. We needed to build a whole new Leap Motion sensor with higher performance and much lower power.” He explained that the company needed to make its software, “Run at nearly 10 times the speed, all while making it smoother and more accurate than ever before.”

At the same time, Leap Motion aimed to address one the issue of FOV. The company’s PC peripheral remains at 140x120, which is noticeably higher than HTC Vive and Oculus Rift, both of which have a 110 FOV. Even still, Leap Motion wanted to go further; making its new mobile VR system support a 180x180 FOV.

A Gear VR reference system will be shipped to headset makers around the world, “To show how all this comes together into a single cohesive product.” Also, Leap Motion will be demoing its new system at major VR events throughout next year, with an enhanced version of its Interaction Engine and Blocks demo.