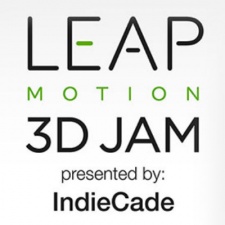 Launching on 19 October 2014, hands-free input device manufacturer Leap Motion is teaming up with event organiser IndieCade to run a six-week global game jam for desktop, virtual reality, and 'beyond.'

The focus of the Leap Motion 3D Jam is to encourage developers to push the boundaries of game and app innovation through the use of the Leap Motion controller; either desk-mounted or using its new virtual reality head mounted display holder.

Over $75,000 is being put up for prizes, which includes $30,000 in cash, a featured spot in a marketing campaign, and a special showcase section being put aside at the IndieCade 2015 event.

Consisting of two tracks, the Leap Motion 3D Jam will seem some winning teams selected at the IndieCade event, while the Open Jam track tacks an online approach to participation.

The initial deadline is set for 15 November, 2014, when initial builds or progress videos are due, with 1 December marking final submissions, and finalists being announced on 20 December and being included in a special Christmas campaign on the Leap Motion store.

Winners of the 3D Jam will be announced on 10 January, 2015 (just in time for Pocket Gamer Connects: London, in fact).

Hardware hubs are being set up in San Francisco, New York, LA, Paris, Berlin, London, Shanghai, Edinburgh, and Toronto for any developers who don't currently have access to the Leap Motion hardware.

More info is available over on the Leap Motion 3D Jam webpage, and regsitration is already open.