Realities Centre To Host AR Conference And Hackathon In January 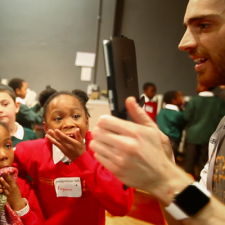 Following its first VR event, Realities Centre, London is hosting two events that will highlight the role of AR technology in education. EdTech: Augmented Reality Conference and EdTech: Augmented Reality Hackathon, both taking place in January 2017, will bring in industry experts for talks and question panels, as well as allow participants to create their own AR experiences.

Taking place in London’s Realities Centre, Collum Eliot-Kelly of Blippar, Edward Miller, an interactive imagery specialist, Ed Barton, CEO of Curiscope, and Deloitte will highlight the benefits of AR in education in a series of talks and panels.

A 24-hour hackathon will task teams with developing a unique AR experience for the benefit of EdTech. Mentors from Blippar, Acorn Aspirations, the Realities Centre and others will be available to support the teams throughout the hackathon.

As part of the event, 25 young people aged 12-18 will be hosted to participate in the hackathon and have an opportunity to develop an AR experience using BlippBuilder.